Microplastic-free - what does that actually mean?

"Would you eat a credit card?" - These and similar headlines appeared in the media last summer [1]. The background is a study on microplastics and its distribution in the environment. The small particles are not only found in landfills or in the ocean. They also enter the food chain via various pathways and thus reach the human body. A strange idea and certainly not beneficial to health. What is particularly frightening is that the amount of a credit card of 5 grams does not find its way into the human organism within a year - but weekly. Reason enough to take a closer look at this special form of plastic.

To understand what is behind the term microplastics, it helps to look at the basic structure of plastics. Plastics, synthetics, polymers - all these terms describe the material that has led to incredible progress in many areas of life. On the other hand, it has also become a major cause of the increasing littering of our earth.

The smallest building blocks of plastics are the monomers, which is already apparent in the name ("mono" is the Latin term for "one"). These small molecules consist mainly of the elements carbon (C) and hydrogen (H). They can be combined by various chemical reactions to form large, long-chain polymers. Here too, the name says it all - "poly" stands for "many" in Latin. Similar to a string of pearls, a polymer consists of many individual monomers that are linked together. For these individual chains to become a material that can be processed, they must adhere to each other. This requires the addition of various auxiliary materials (additives). Only this combination of polymers and additives is called plastic, or colloquially plastic.

Plastics can be both fossil-based and bio-based. The classical way of producing plastics starts with the fossil fuels oil and natural gas. They are processed into basic polymers and finished plastics, such as polypropylene (PP), by way of different processing steps.

Biobased plastics on the other hand are produced on the basis of a biological or renewable raw material. They can be produced in different ways. Their precursors, the bio-based polymers, can be obtained entirely in nature. This is the case for example with the bioplastic PHA (polyhydroxyalkanoates). These are then simply processed into plastics using additives. In the case of PLA (polylactides), however, nature provides the corresponding monomers. These are then chained together to form polymers and further processed into plastics. Important at this point: The origin of the building blocks (monomers, polymers) does not necessarily have an influence on the properties and structure of the respective plastic. Monomers for the fossil plastic polypropylene can also be produced from renewable raw materials instead of crude oil.

What is behind the term microplasty?

Microplastic is often associated with cosmetic products. It does indeed play a role here, especially in the form of abrasive particles in peelings or cleaning agents. The German Federal Environment Agency defines microplastics as "plastic particles that are five millimeters and smaller" [2]. The decisive parameter that distinguishes microplastics from "normal" plastics (macroplastics) is thus the size of the particles.

The above definition of microplastics only includes water-insoluble, i.e. solid particles. Environmental organisations such as Greenpeace define the term microplastics even more broadly [3]. In addition to solid particles, they also include water-soluble polymers in the definition of microplastics. This is because these substances can also have an ecotoxic effect. Water-soluble polymers are contained, for example, as additives in detergents and cleaning agents. They can enter our rivers and lakes via wastewater. These substances are suspected of having a negative effect on the hormone balance of the fish living there and thus causing long-term damage to ecosystems. 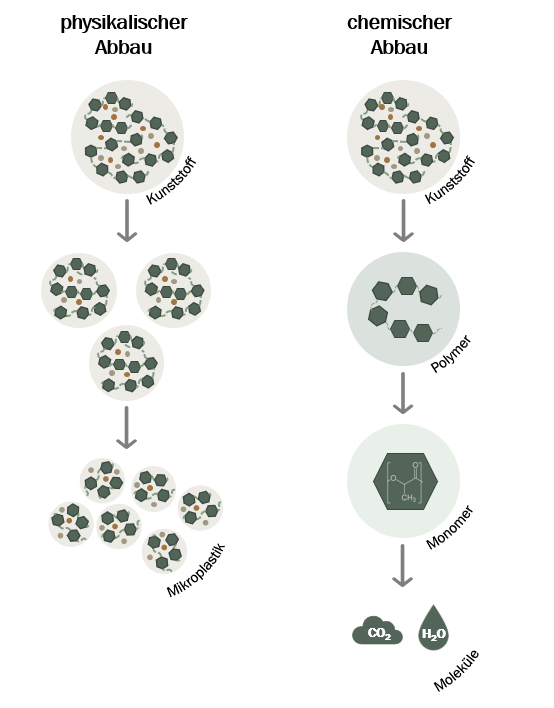 How does the microplastic get on our plate?

Whether water-soluble or solid particles - a large proportion of the microplastics reaches our environment via wastewater. A part of it is flushed into our waters and thus also into drinking water. In addition, sewage treatment plants catch large quantities of the plastic particles in the remaining sewage sludge. This in turn is often used as fertiliser on agricultural fields. This closes the circle for the absorption of microplastics through food. In Germany, a total of 9,696 tonnes of microplastics were spread on arable land with sewage sludge in 2016 [4].

The very idea of ingesting plastic through food seems repulsive. In addition, the effects of these particles on the organism and health have been little researched so far. What is certain is that they can cause physical damage to the gastrointestinal tract. This means that they can displace or impede food intake, especially in animals. It is not without reason that images of starving sea dwellers are repeatedly found in the (social) media, who die with a stomach full of plastic.

Why do biodegradable plastics not decompose into microplastics?

The decomposition of plastics into microplastics is fundamentally different from biodegradation. Microplastics are created during the physical decomposition of plastics. This means that larger plastic parts become smaller and smaller due to external influences such as pressure, radiation and temperature. However, the chemical structure, i.e. the connection between the molecules, remains unchanged. In contrast, biodegradable plastics are chemically decomposed. Accordingly, the molecular structure is not preserved. This is where microorganisms help, attacking the connections between the molecules and breaking them down into ever smaller components. At the end of this process, only starting materials such as carbon dioxide (CO2), water (H2O) and minerals remain. So while microplastics do not dissolve but remain in the environment in the form of solid particles for decades, biodegradable plastics decompose without leaving any residue.

What is the difference between biodegradable and compostable?

Biodegradability, as described above, is not subject to a defined time period. Therefore, biodegradable plastics can also become a problem for the environment. This happens when they degrade over a very long period of time, such as several years.

Compostability, on the other hand, refers to degradation under defined conditions over a certain period of time. A distinction is made here between industrial composting and classic garden compost. In industrial composting, the plastic must decompose within 12 weeks at 60 °C to a majority of water,CO2 and minerals. During the subsequent screening of the material, through a sieve with openings of 2 millimetres, no more than 10% of the original quantity may remain. In contrast, degradation in garden compost at less than 30 °C must take place within one year. This is also known as home compostable or home compostable.

Accordingly, the certificate of compostability does not exclude the possibility that the product to be composted contains fossil components. It may even contain non-degradable ingredients in small quantities. Many of the compostable coffee capsules are therefore not only based on renewable raw materials, but are mixed ("blended") with fossil components. This is the decisive difference between the rezemo wooden capsule and other coffee capsules on the market: the rezemo wooden coffee capsule contains 100% bio-based ingredients. For us at rezemo, transparency is a core element of our corporate philosophy - and this also applies to our material. How you can best dispose of our coffee capsules can be found in ourBlog post on capsule disposal read about it.

Why is the rezemo coffee capsule sustainable?

Compost is also characterised by its humus-forming and soil-improving effect. This is primarily achieved by larger biomass particles such as wood chips or other plant residues. They loosen the soil and provide nutrients. These positive effects cannot be achieved by composting pure bioplastics. This is because they do not contain biomass in its original form.

The rezemo coffee capsule consists mainly of wood and therefore contains quite a lot of the "good" biomass. The wood is processed in the form of sawdust embedded in a PLA matrix. The contained wood not only provides nutrients and supports humus formation. It also accelerates the decomposition process. The sawdust soaks up water shortly after the coffee is prepared, thus increasing the surface area for microorganisms to attack. These are crucial for the subsequent decomposition. In addition, coffee grounds are often used as an effective fertiliser - making the coffee capsule an all-rounder.